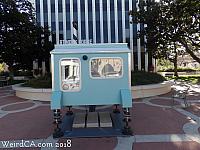 The Artwork Forge in Palo Alto 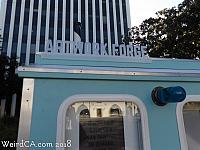 In front of Palo Alto's City Hall is the temporary art exhibit, The Artwork Forge, and it is best described as an art piece that is a robot that creates other art pieces!

It's basically a small light blu-ish box with some legs and windows. You put four quarters in one end, it performs some "magic", and it dispenses a small piece of recently painted artwork out the other end. All money collected is used to replace the materials necessary to generate the artwork.

It is meant to simulate the experience of commissioning an original artwork. On the left side of the front of the box, there is a computer screen, and the machine zeroes in on your location (currently Palo Alto). It then, supposedly adds in social media, news trends, and celebrated masterworks of art to produce your very own picture. 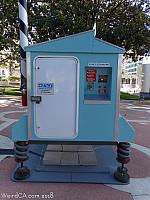 Left End of the Artwork Forge 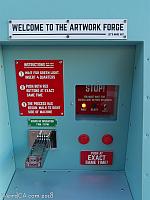 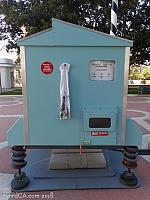 Right End of The Artwork Forge

After you insert your quarters and press two red buttons simultaneously, the computer screen shows you your location and the main window is revealed. There you can see the back of your artwork as it is "painted". Next, it heads off to the drying area, and after several drying lights turn on, it is dispensed out the right side of the machine. A hook and towel are there to get your artwork in case it is still a bit wet.

The work of Pittsburgh, Pennsylvania artist,Toby Atticus Fraley, this is the second Artwork Forge. The first one is in Scottsdale and is a bit bigger with two windows in front, instead of one. The Palo Alto Artwork Forge arrived in Novemeber 2017, and will only be present until the end of March 2018, maybe April.

When we went, our first attempt was successful, and a small piece of artwork was dispensed. Another visitor then utilized the machine and had artwork made. Tiffany and I tried to make a second piece, but, for some reason, it failed to dispense. Our third try was, thankfully, successful. 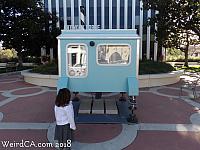 Tiffany checks out the Artwork Forge 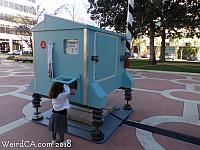 Tiffany gets her artwork 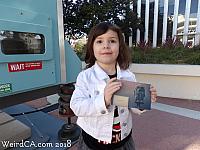 Tiffany shows off her artwork