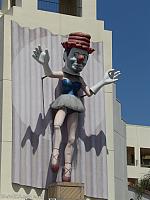 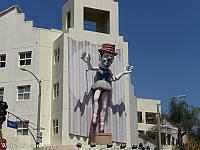 So you're visiting Venice, California and you forgot your toothbrush at home. Deciding to hit up the nearest CVS Pharmacy, you ask for directions and are told it's under the three story tall ballerina clown.

Yes, that's right, situated above the entrance to CVS Pharmacy, made out of fiberglass, aluminum, and steel, and wearing a ballerina dress is a three story tall hobo clown. It sits at the corner of Main and Rose, above a CVS on a mixed use building consisting of both commercial and residential.

Originally made by Jonathan Borofsky in 1988, the sculpture, consisting of the red nosed head of a hobo clown and the body of a tutu and ballet shoeballerina, is attached to the side of the building. It's right leg is rigged with an electric motor that would allow the clown ballerina to slowly kick, but it's only occasionally turned on since it's apparently noisy, causing the residents to complain. I've heard that it might kick from one to six pm every day. 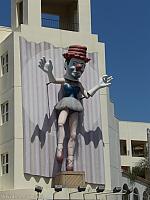 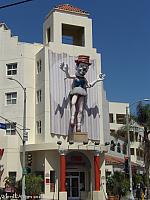 The clown is suppose to capture the "juxtaposition in the neighborhood's complex character". According to Borofsky the artist:

"The Venice Boardwalk is full of all kinds of people in all sorts of outfits and the atmosphere is very festive with many live street performances taking place, especially on weekends. This sculpture is an accommodation or resolution of opposites in one. Not only does this image bring the male and female together into one figure, but also, two opposite types of performers are represented: the formal classical ballet dancer and the traditional street performer. Of course, this public sculpture might push the envelope in 'taste', but if you have ever walked the Venice Boardwalk on a Sunday afternoon, you might understand why this figure is right at home."