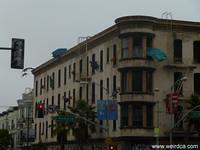 To Throw Out Of a Window

On the corner of 6th and Howard in the SoMa area of San Francisco, an abandoned tenement building stood, empty and a blight on the city. Originally called the Hugo Hotel, in 1997, Brian Goggin along with over 100 volunteers showed up and transformed the entire dilapidated building into the art piece: Defenestration.

Defenestration is the act of throwing a thing out of a window. And Goggin placed multiple pieces of furniture along with other objects on the abandoned building all frozen in the act of being thrown out of the building's windows. See 46 different items including couches, beds, chairs, wardrobes, lamps, TVs, tables, and even a grandfather clock, bathtub and refrigerator, all emerging from the windows of the building, as if they all decided to commit suicide and jump at the same time, all frozen in the middle of falling down to the street.

Additionally the bottom story of the tenement building showcases local graffiti or "street murals", one mural soon being replaced by another in an endless rotation.

The site underwent restoration in 2010, thus maintaining the artwork. Sadly though, the entire building along with the artwork is slated to be destroyed sometime in 2014 to make way for low income housing.

If you decide to visit, the art piece is located a few blocks off of Market Street, although the neighborhood is distinctly different than the area around Market, so be careful as you walk the few short blocks as the area is less than safe. 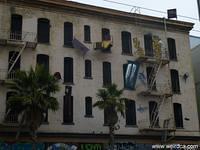 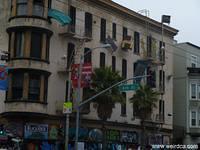 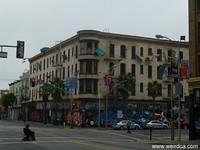 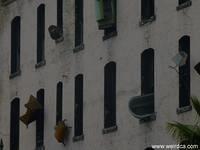 2/2016 Update: the artwork was removed I think sometime in 2014 and the building entirely torn down in 2015 in order to make way for new housing. This art piece is no more.